- August 21, 2012
Soon after we'd moved to Kelowna in 1995 we took a short hike over a few of the Myra Canyon trestles with visiting relatives. Each June since then, I've declared "..that this will be the summer we finally bike the Myra Canyon Trestles". 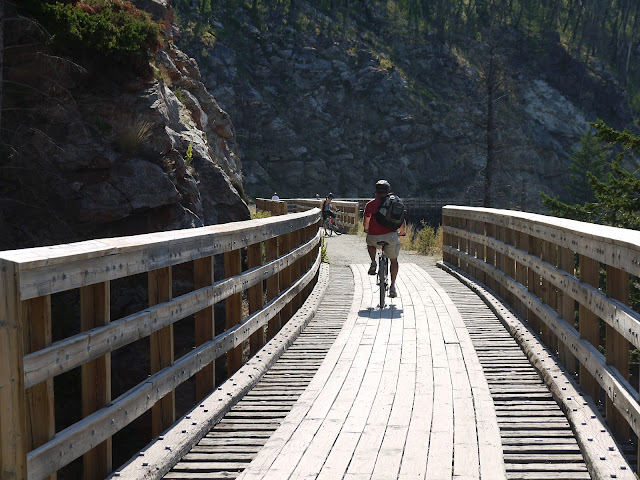 In January 2003 my desire to do the trek was renewed when Myra Canyon was designated a National Historic Site.  Then sadly, nine months later, 12 of the 18 trestles were burned in the Okanagan Mountain Park Fire. 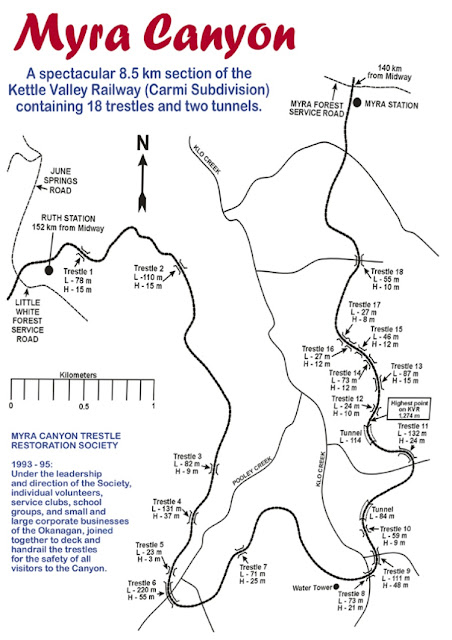 I was rather annoyed with myself for not taking advantage of the opportunity to experience this beautiful trail.  How devastating it must have been to the dedicated volunteers who beginning in 1992 spent three summers repairing and making these trestles safe, building a 4 foot boardwalk across each trestle, putting up guard rails, constructing benches at various lookout points and posting interpretive signage.  All labour, material and equipment was donated and once the restoration was complete, the volunteer group continued to maintain and oversee the upkeep of the trail and trestles.  How disheartening it must have been to see all that hard work up in smoke in a few short days.

Thank goodness for volunteer groups!  One year after the fire, the first trestle was rebuilt and five years later in 2009, the final trestle was complete, thanks to the Myra Canyon Reconstruction Project Management Committee which was made up of the original Myra Canyon Trestle Restoration Society (MCTRS), BC Parks and helped along with a grant from the Federal/Provincial Disaster Relief Fund.

Still, it's taken me another three years (I was so sure we were going to do it last summer), to get around to biking the trestles.  This past Sunday morning we loaded our bikes and packs into the back of our little red truck and we travelled the washboard Myra Forest Service Road up to Myra Station.  Myra Station is actually the end of this section of the railway bed, but whenever we visit the area, we start at this end because the trestles are closer together and the two tunnels are in this stretch.

By 9:45 we were on our way across our first trestle, #18.  It was a great time of day to be on the trail.  Due to the elevation and early-ish hour, it was a bit cooler compared to the valley bottom.  The east side of the trail was fairly shaded by the tress and rock faces that we wound our way past and the tunnels were quite cool inside.  Dark too.  It was an odd sensation peddling through the murkiness, watching the light streaming through the opening ahead, not really able to see the road beneath you (especially if you kept your sunglasses on).  There weren't many people on the trail yet - more cyclists than hikers at this point.  At times it seemed like we were on our own with birds, butterflies and chipmunks as our only companions.

It took us an hour to get from trestle 18 to the park entrance at Ruth Station, which was about a kilometre from the last trestle we crossed, which was in fact trestle #1 (confused yet?).  The total distance from the where we parked at Myra Station, to the park entrance at Ruth Station was 12 kilometres so I think we did quite well considering I stopped to take 38 photographs along the way.  Here are a few: 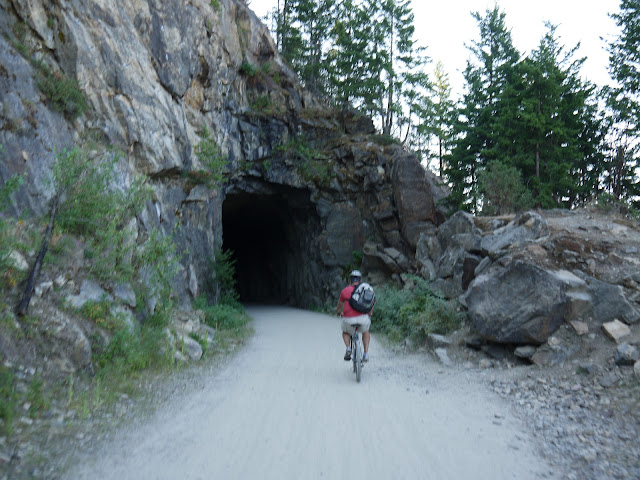 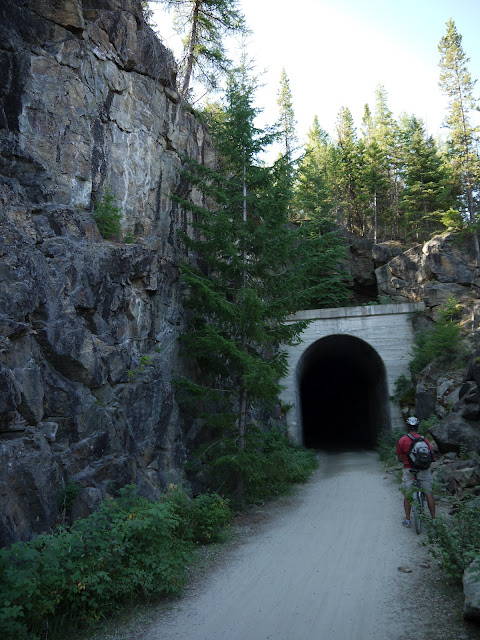 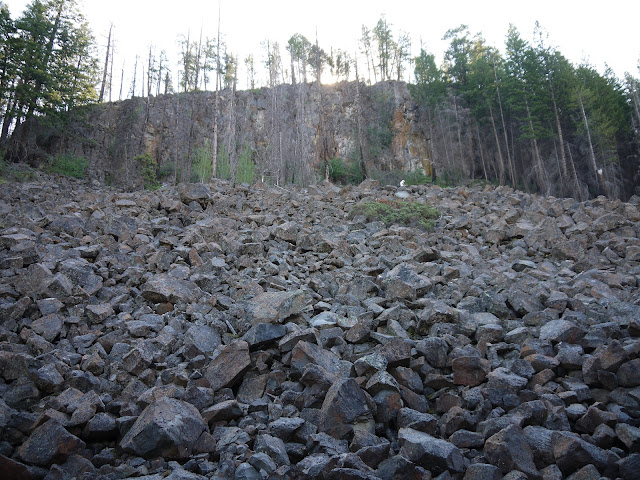 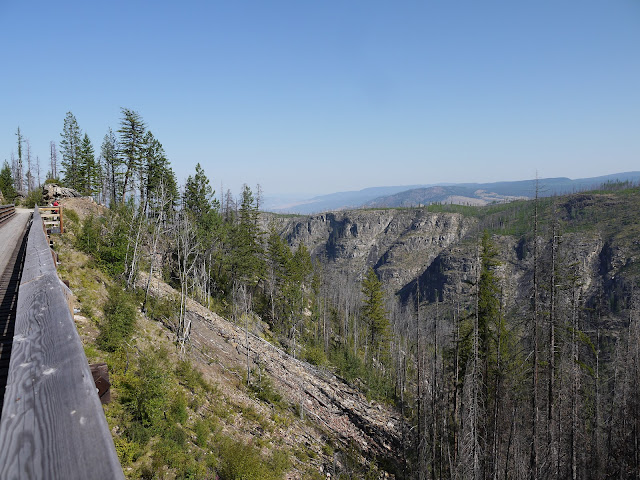 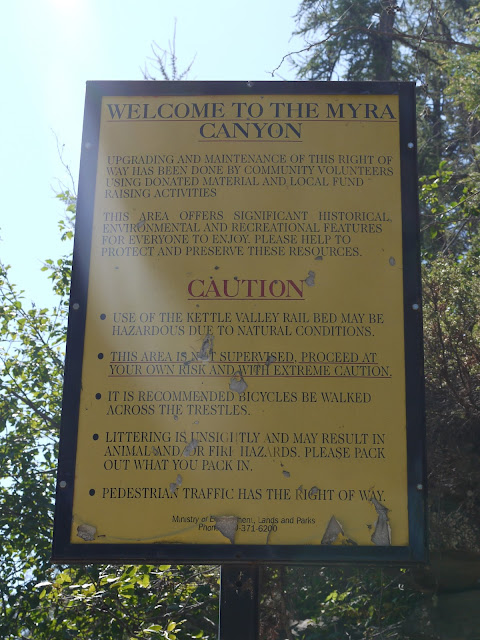 This is one of the original signs though I'm not sure when it was posted.  The caution "It is recommended bicycles be walked across the trestles." indicates it was definitely pre-1995 when the boardwalks and guard rails were in place.  Before that time a cyclist had died as the result of a fall from a trestle.

The first Myra Canyon Trestles, along with two iron bridges and two tunnels were constructed between 1912 and 1914 and are part of the Kettle Valley Railway which was built to connect the Kootenys to the BC Coast.

I wanted to find out more about the brave men who risked their lives, and I'm sure there were some who died as well, to build this challenging triumph of engineering. Unfortunately all the websites I found in my searches focused on John McCullough the design engineer.

"In a truly outstanding feat of railway construction engineering, KVR Chief Engineer Andrew McCulloch managed to locate, layout, and construct a railway directly through the Myra Canyon by seemingly hanging the supporting engineering works around the rim of the canyon, several thousand feet above the canyon floor. "  Quite a feat for one man wouldn't you say?

I did manage to discover a book called "Myra's Men" written by UBCO professor  Maurice Williams.  It's definitely going to the top of my "to read" list. 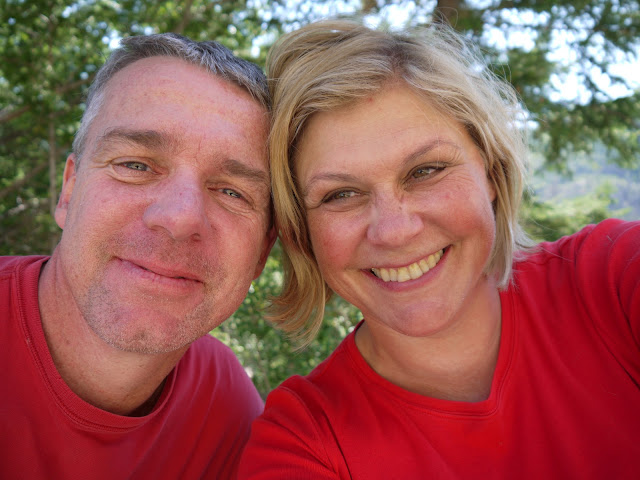 We turned our bikes around at Ruth Station and stopped for lunch on a bench in the shade near trestle number 1.  As you can see I'm quite pleased by our accomplishment.  I wasn't very active 15 years ago when we first started talking about biking the trail, and a 24 kilometre bike ride seemed quite daunting to me then.  Turns out it was a piece of cake. 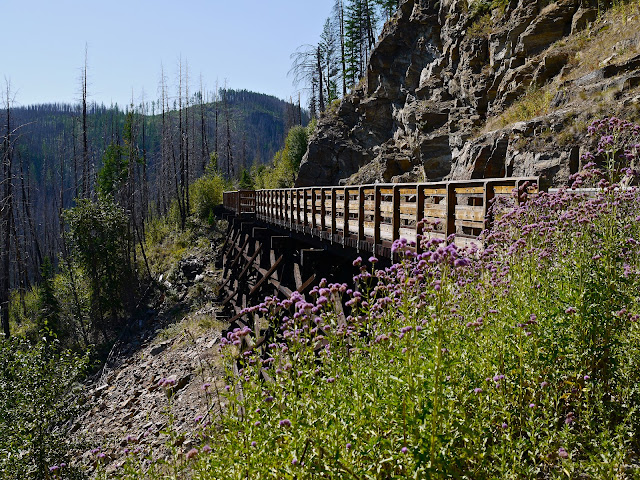 Here's a shot of trestle number one.  Our trip back took about two hours, mainly because I stopped to take 85 more photos.  My husband really is a patient man...or at least he was until about photograph number 75. 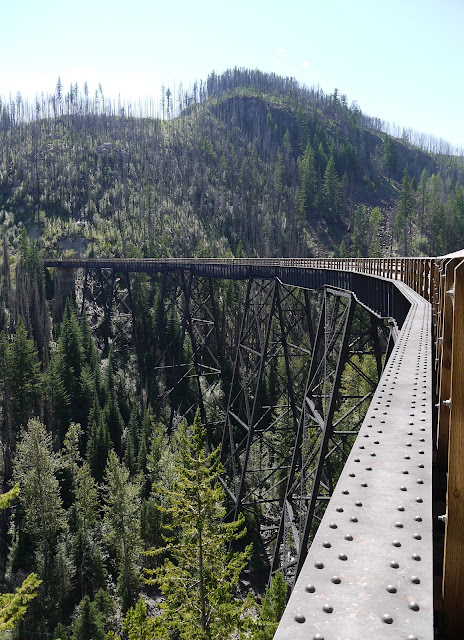 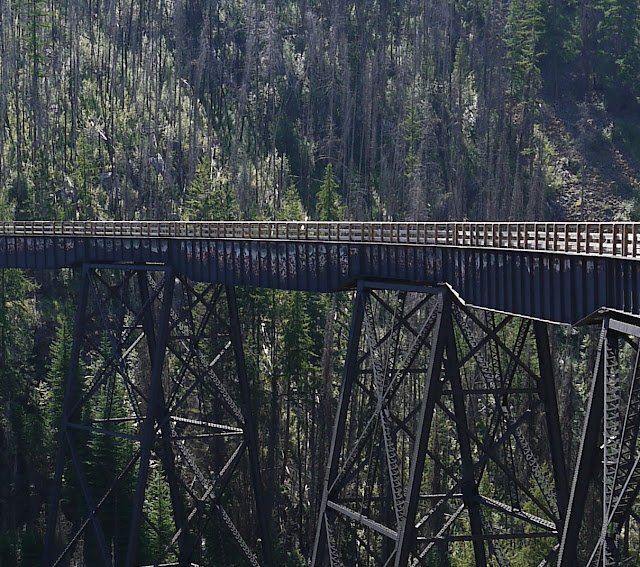 I added the close up of trestle six because of the "design" along the side. I think it's just from weathering, but it does almost look like a mural depicting mountain range.  Or is it just me?  Mother nature does good work! 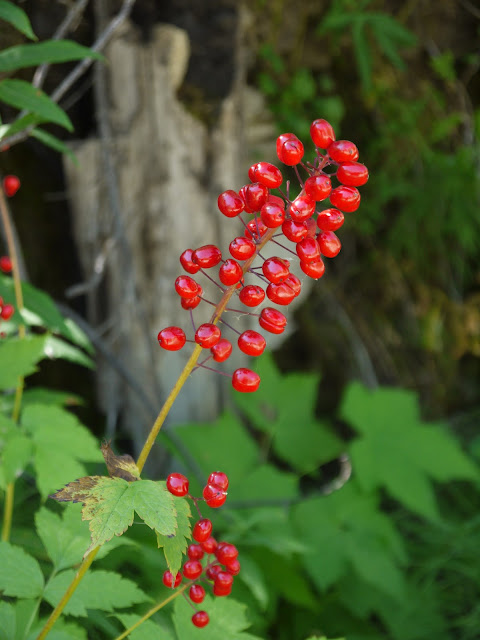 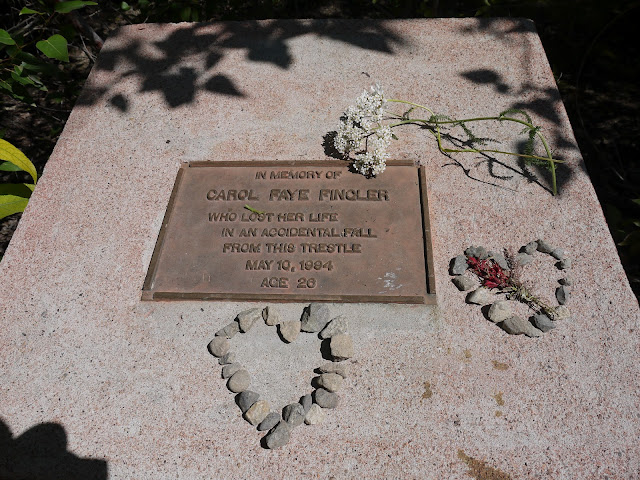 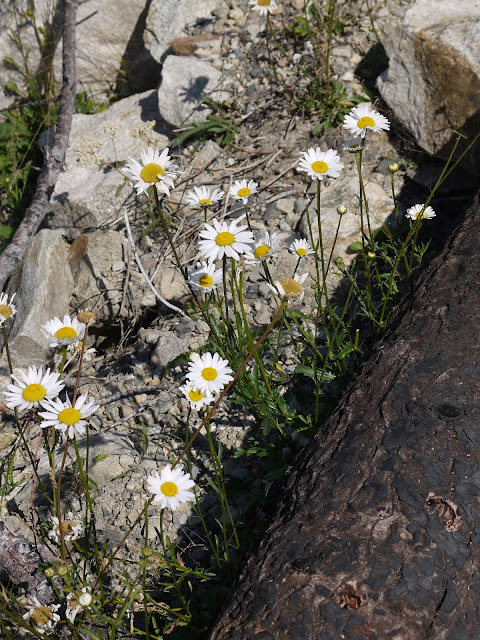 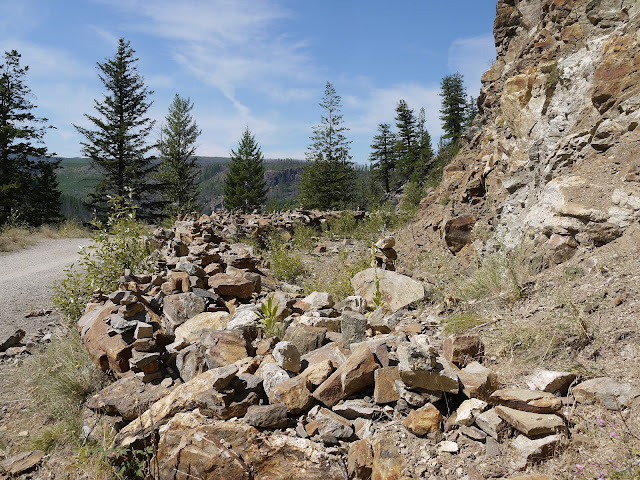 Along the edge of the trail as you approach the first tunnel from the south, people have been assembling Inukshuks from the rock fall.  I made the one below, all on my own.  My partner was finding it a bit warm in the sun and preferred to watch me toil from his spot in the shade. 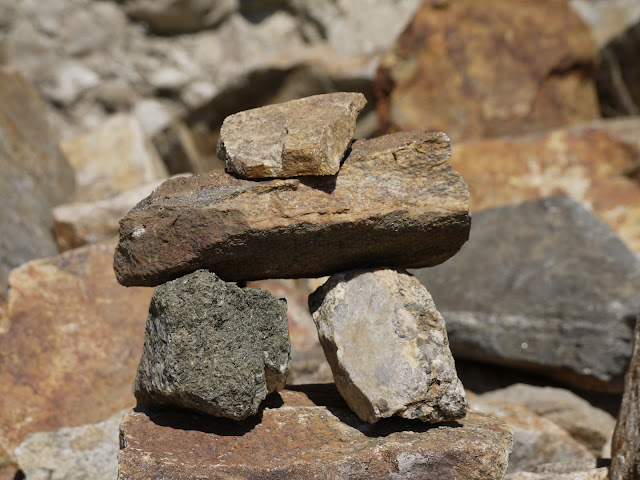 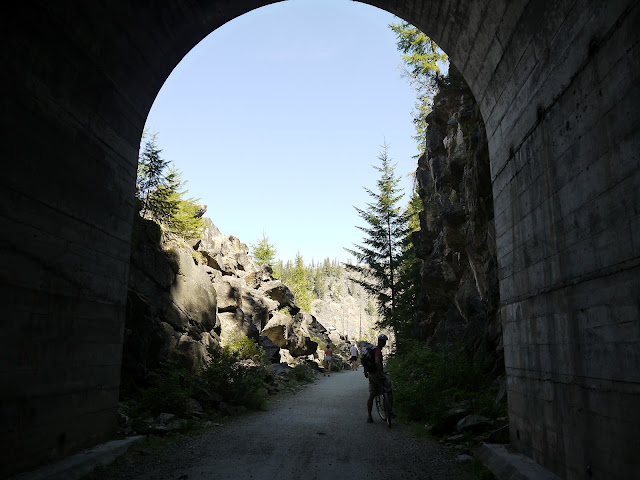 From here on it started to get a lot busier, and a lot warmer. 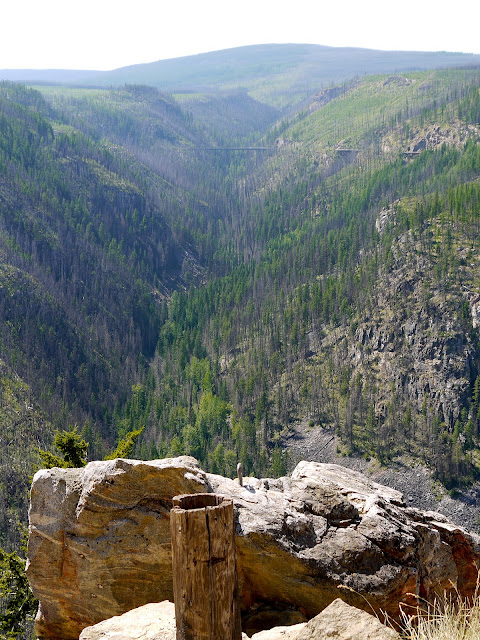 We only had a couple of kilometres left so it wasn't too bad, but if we did the trip again I'd try to be at the beginning of the trail no later than 9 am.

With a predicted high of 35 degrees in the valley, I wouldn't  have wanted to be starting a hike or bike ride at that time of day.  It was getting on to 1:00 by the time we headed back down the logging road and we did come across quite a few vehicles on their way up.

All in all it was a wonderful day and I'm looking forward to sharing it with the next group of summer visitors we have.
Until then, I'll leave you with one last photo.  Remember my earlier post about Scenic Canyon Park?  I mentioned we didn't make it to the highlight of the hike, the base of Layer Cake Mountain. 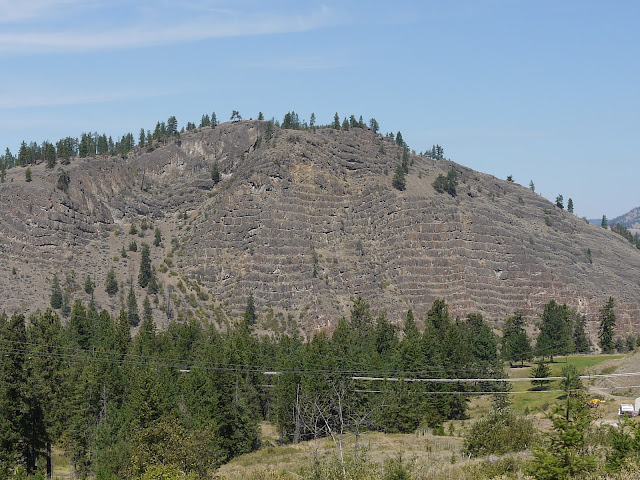 This was taken at the bottom of the forestry road that leads to Myra Station.  Here you have an excellent view of that oddly shaped mountain, giving you an indication of how it got its name.  I hope my next hiking post will show you the canyon and creek at the base of the mountain... maybe next Sunday?!

Note:  If you're just visiting Kelowna and didn't bring your bikes Monashee Adventures offers many options for bike rentals and guided tours. They'll drive you up to the site and let you work your way back down.  There are also bikes at their canteen at rental station up at Myra Station (though I think it's best to book ahead to make sure there's a bike for you once you get there).
biking hiking Inukshuk Myra Canyon Trestles Okanagan Mountain Park Fire 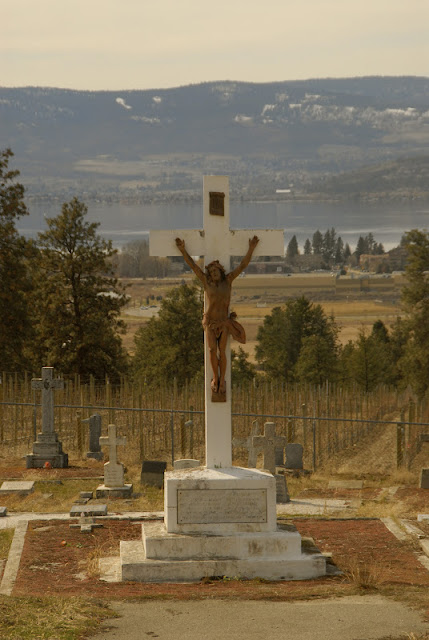 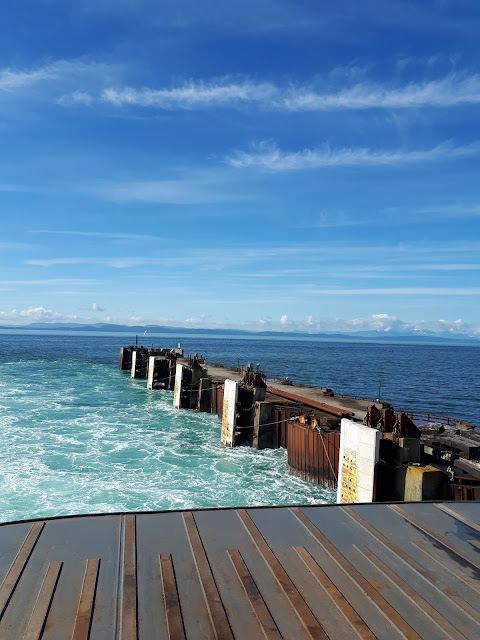